I would like to say that I can take credit for these photos, but I found them at DowntownYoungstown.com who took them from The Vindicator. The State Theatre, the Paramount Theatre and today's Draught House (the Singer Sewing Machine shop) are all visible. 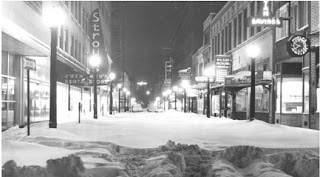 YOUNGSTOWN — The Ohio State Highway Patrol has allocated several troopers to patrol within the city limits with a goal of reducing urban fatalities, said Mayor Jay Williams. The goal, he said, is consistent with the city's proactive efforts to help create a safer community. Troopers will focus on U.S. and state routes within the city. This will allow city officers to focus more sharply on the residential neighborhoods and businesses within the city. The joint effort will last until early March and serve as a trial period to evaluate the collaboration, the mayor said. He expects future joint efforts will occur this year.

According to The Vindicator, from Feb. 2 to 2 p.m. February 11, there have been:

If you want to know when a new post has been made to Youngstown Pride, all you have to do is subscribe to one of our new newsfeeds located on the right hand control panelbottom at the bottom. If you use a newsfeed program not located on this page, let me know I can add a link to it.
Posted by Joe Lowry at 1:35 PM No comments:

A few weeks ago a stir was created by articles in USA Today and The New York Times on the redevelopment of Youngstown. Bloggers in Youngstown weren't the only ones to comment. Follow this link to go to Pittsblog and an article entitled "Learning from Youngstown".
Posted by Joe Lowry at 11:19 AM No comments:

Probation for Arson? Only in Youngstown

This should tick you off. Four people were involved in setting their Rhoda Avenue house in Youngstown on fire FOUR TIMES for insurance money. Because the Mahoning County Prosecutor's Office and the Mahoning County Common Pleas Court didn't communicate properly, the four ended up with probation only - FOR ARSON. According to Alvin Ware, captain of the Youngstown Fire Department's Arson Bureau, many personal belongings were removed from the house and placed in storage before the four separate fires were set.

Youngstown has a long history of arson fires, including those set last winter when almost thirty arson fires were occurred on North Side. If this is the type of prosecution we can expect for such crimes, where is the deterrence for the criminals? Arson fires put lives at risk, especially those of the firefighters whose job it is to extinguish these blazes. Countless days of lost time have been reported in the last year by firefighters injured in Youngstown arson's, including by several firefighters who have fallen through rotted or burned out floors. Probation for those who commit such crimes, especially when they are committed for personal gain, because of a mix up by the prosecutor's office is sad and shouldn't be tolerated.

Check out the full article at YoungstownFire.com.
Posted by Joe Lowry at 9:40 AM No comments:

I added three new links to the Links section on the right.

All are worth checking out if you have the time. 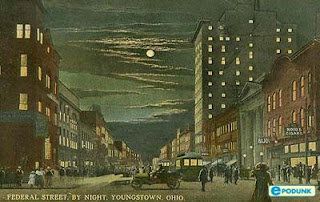 A postcard I have never seen before, Federal Street at night. I am guessing this is from the early 1920's. 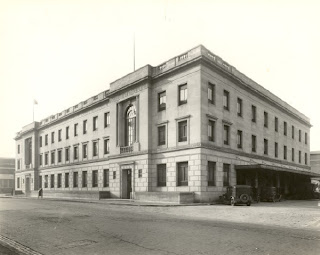 I found this picture on the website of the U.S. 6th Circuit Court of Appeals. It lists this building as the Thomas Lambros Federal Courthouse. First, I thought this building was built as the Post Office and remained as such until Mahoning County purchased it as an annex space. Second, this isn't the current courthouse, which is across the street from where this building still stands. If anyone has any further history on this building, let me know.
Posted by Joe Lowry at 10:28 AM No comments:

Last week was a good week by all standards for Downtown Youngstown. According to the nearly official source DowntownYoungstown.com, last Saturday night there were 9,000 people downtown enjoying a variety of events.

YSU went on to defeat the UIC Flames for the first time in school history and the bars looked like they were busy. Never mind the cold, it was a great night to be downtown enjoying a wide variety of events which Youngstown has to offer. More nights like these can definitely be expected into the summer! 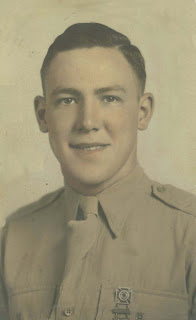 Charles J. Lowry, life-long resident of Youngstown, father of eleven children, grandfather of eighteen and great-grandather to two, died early Sunday morning at his home after a long illness. He was born November 10, 1924, the only child of Charles E. and Margaret M. Lowry, attended McKinley Elementary School, and graduated from Ursuline High School in 1942. He spent time in the United States Army during World War II, receiving the Purple Heart. He married Jean Grocutt at Saint Columba in 1948. Jean passed away in February 1987. He was well known in Yougstown for owning Lowry's Custard Stand, first on Belmont Avenue and then for a long time on Logan Avenue. He retired from the United States Post Office and in his retirement, gave his time to the St. Vincent DePaul Society, for whom he opened and operated their first soup kitchen on Front Street from 1981 until 1987. He remained active in the St. Edward's St. Vincent DePaul Society until recently. He also was known for organizing bus trips to Saint Anne de Beaupre Shrine in Quebec, Canada and Notre Dame football games. In 2000, he was inducted into the Ursuline High School Athletic Hall of Fame, the first tennis player to be inducted. 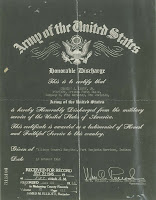 Chuck's Honorable Discharge papers from the United States Army in 1945. He received the Purple Heart and Bronze Star for being wounded during the battle for Brest, France on August 28, 1944. He spent almost two years in hospitals both in England and at Fort Benjamin Harrison, Indiana.

Chuck with his new bride Jean and Grandpa Pepperney on his wedding day, May 29, 1948.

Chuck with his granddaughter Caroline and her new husband Jon on their wedding day, November 25, 2006.

Chuck and Jean with little Pat on the front stoop at their house on Mansell. 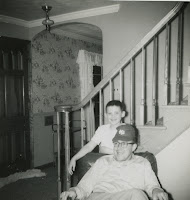 I'm sure he is plotting his way out of this event.

Chuck and Jean celebrating Christmas at his son Pat's house on Dennick Avenue in 1986.

Chuck with his daughters Mary and Kathy out at Chuck's house in Liberty.

More of his 80th birthday party, with son Mike in the foreground and daughter Margaret next to him. 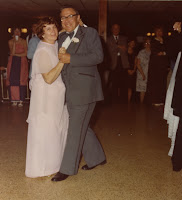 Look out to Miss Lotte Lenya and old Lucy Brown
Yes, that line forms on the right, babe
Now that Macky’s back in town …
To leave comments and reflections of Chuck, select the "# Comments" link below this line.
Posted by Joe Lowry at 10:13 AM 1 comment:

Labels: lions of the north side

Even by Youngstown standards

A great op-ed in today's Tribune-Chronicle really gets at the heart of what's wrong with so many in this city: they are apathetic towards crime. The recent murders of four individuals brought the comment from Mayor Jay Williams that the crime was ‘‘shocking, even by Youngstown standards.’’ That implies even at the highest level of city government that that crime is expected and accepted. Why it takes the execution-style murder of four people for the police to beef up patrols is beyond me. Youngstown has been near the top of the Most Dangerous Cities list for a long time. The Trib believes the time has come to change the assumptions about Youngstown, and we should too.
Posted by Joe Lowry at 10:26 AM No comments: