Back for a little while

My initial objection to being a casual writer to this blog was that my readership, assuming I had one, would get frustrated at long gaps between posts. I felt that I brought some closure to my initial (4-year) attempt at this blog by at least telling people that I wasn't coming back any more.

Next thing I know, the city decides to sell Fire Station 7. I later learned that it was a planned move and in the budget documents for a year. Regardless, no one was annoyed, frustrated or outraged at the move. No discussion occurred and it all went unsaid. I took the opportunity to write a rather disheveled entry about sentimental thoughts and poor development choices. I felt that the entire event going unmentioned outside of The Vindicator wasn't appropriate.

It got my juices flowing again. Sort of. Maybe I will post once a week; maybe my posts will be months apart. Maybe the Youngstown Pride will win the 2010 WBL World Championship. There are a lot of uncertainties ahead, but I may try and blog about them.
Posted by Joe Lowry at 2:13 PM No comments:

Call is nostalgia, call it love, call it what you will. Youngstown's Fire Station 7 has always been 'my' firehouse. It's not difficult to see the beautify and history in this firehouse that this year celebrated its 105th anniversary. 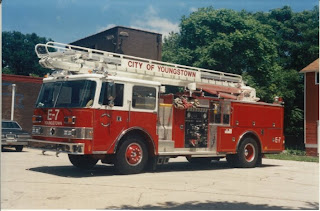 It started in the fall of 1989 when YFD Fire Inspector Hubert Clardy, recently retired, and the crew of Engine 7 brought to St. Edward School the finest fire engine ever to pump a working fire in Youngstown. A fire prevention lesson to a 3rd grade class, some stop-drop-and-rolling, and a chance to sit up in the seat of that magnificent pumper and I was hooked for life.

It was that encounter with that crew, engine and and the connection to that fire station that made me realize that I wanted to be a firefighter. Most young kids grow out of that phase in their life where red lights and sirens cause them to run to the window. I still leap over the furniture. Ask my wife.

My love of the fire service began with Station 7. Yesterday, the city put a price on it. In a move that raised no apparent public debate or outcry, Youngstown sold Fire Station 7 to US Campus Suites LLC to the tune of $1 million. Youngstown gets to lease the firehouse for about three more years at $10 a year until US Campus Suites is ready to build The Flats at Wick student housing complex. In 2012 (or so), like so much of Youngstown history, Fire Station 7 is a memory.

At a time when Youngstown finally is so close to determining its future, with a motivated generation of self-made public planners, and positive development abounds, it takes a giant step backward by selling its history. 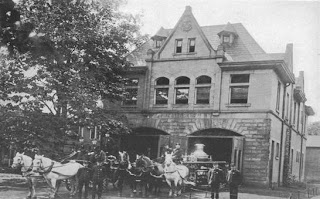 Numerous news articles and blog posts have cried out for the need to save the Wick Park Historic District. Homes and houses alike have been burned by arsonists, salvagers and thieves along Park Ave, Pennsylvania, Woodbine, Broadway, North Heights, and Fairgreen. The neighborhood would probably burn with greater ferocity if not for Engine 7, just around the corner.

An unfortunate consequence of these arsonists are the vacant plots of land that dot every street. Why not use this land for student housing? It's within a half block of the existing Cafaro and Lyden housing, cheaply available, and ready to build. Instead, the city sold out in an effort to cut its deficit. The cost was a neighborhood institution, now sitting on death row.

The city will argue that downtown Fire Station 1 is adequate to serve the North Side. They are correct in that Fire Station 1 can handle the additional firefighters and trucks. There is space within the firehouse for three firefighters per shift and an extra truck.

Where they are wrong is the additional time it will take that fire engine to get to fires on the Lower East Side, the far North Side, and the highway responses of the Madison Avenue Expressway. The distance between the two station is 1.1 miles. For someone trapped in a fire, that's minutes. Response times to those neighborhoods will suffer; Fire loss may go up.

Youngstown's efforts were not interested in the protection of a neighborhood. They were out to cut deficits at the expense of the history of the neighborhood they say they are trying to save. Front page stories tell of Pennsylvania Ave homes burning as the city sells the nearest firehouse. Where is the outrage?
Posted by Joe Lowry at 9:24 AM 2 comments: