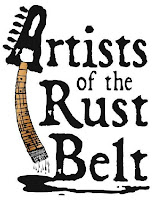 Try taking in the Calvin Center for the Arts Grand Opening Festival! Artists of the Rust Belt will be holding a show at this new location tomorrow (12-7) and Sunday (12-5). The show will feature local artists, food and beer. Check it out at 755 Mahoning Avenue, Youngstown. Find out more about this group and event at their website.
Posted by Joe Lowry at 9:00 AM No comments:

Love it... more on urban ag

From the Associated Press...
Motor City may provide model for urban agriculture


By DAVID RUNK, Associated Press Writer
(AP) --Detroit, which revolutionized manufacturing with its auto assembly lines, could once again be a model for the world as residents transform vacant, often-blighted land into a source of fresh food.

But no city seems to have as much potential for urban farming as Detroit, where land is cheap, empty lots are plentiful, and residents are desperate for jobs. The number of community gardens has been growing each year, and bigger, commercial agriculture could be coming as city planners draw up land use rules for farming. 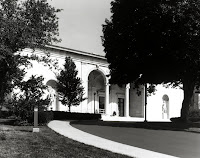 Youngstown's personality and place in history allows it to have some of the greatest cultural wonders not thought of in the average city of 70,000. One of those wonders is the Butler Institute of American Art. If you haven't been there in a while (and I haven't), you should check out the Jackson Pollack piece on loan, 'Silver and Black,' or the paintings of John Stobart, a leading artist of ships under sail. Being a guy who loves ships and yet has never been sailing, Stobart's work is right up my alley. (I'm really sounding cultured here, aren't I?)
Butler Instutute of American Art
524 Wick Avenue
330-743-1107
Posted by Joe Lowry at 3:34 PM No comments:

(I realize that I'm a few days late, but the beauty of Blogger is being able to backdate my posts... Thanks, Blogger Team!)


It's Wednesday (err... Monday). How about heading over to Salsita's for margaritas? Youngstown is blessed with some great ethnic restaurants. In fact, you can't find a respectable chain joint that people will go out of their way to get into to. The same can't be said for the locally owned restaurants. Salsita's is one of those places. Stop in for a margarita, some tacos or enchiladas!
3031 Mahoning Ave
Youngstown
330-270-9151 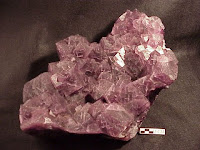 When I was a child, I had a minor fascination with rocks and minerals after a visit to Discovery Place. Think COSI but in Charlotte, North Carolina. I had no idea that we have a mineral museum in Youngstown, but incredibly, we do. How about a visit to the Clarence R. Smith Mineral Museum which is located at YSU and sponsored by the Department of Geological and Environmental Sciences. The museum is located in the atrium of Moser Hall and is open Monday through Friday from 9:00 a.m. until 3:00 p.m. Have a science class or tour group? Give them a call and they can set up something personalized.
Moser Hall atrium
On the campus of Youngstown State University
(330) 941-3612
Posted by Joe Lowry at 9:06 AM 1 comment: 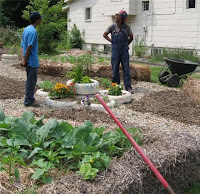 Today is a pretty dreary day in Youngstown. So if you don't get out to see anything today, put on some coffee and hang around the house. But before the summer is out, you've got to see (and taste) what is going on right here under your nose.

In the past few years a number of community gardens have started up in Youngstown. I'll just mention a few and if there is not one near you, feel free to start one. Jubilee Gardens, Inc. is located on Lafayette Street in Briar Hill and has been around since the 1980's. Fairgreen Garden, operated by GROW Youngstown, is located at the corner of Fairgreen and Ohio Avenues, and Avondale Garden (pictured) is located on the south side, on Avondale Street, just east of Southern Blvd.

Their goal is to bring fresh produce to the city and help people to garden sucessfully.
Posted by Youngstown Born and Still Here at 4:10 PM No comments: 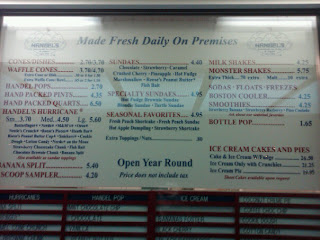 It is my favorite day of the week. Why not eat my favorite food? Ice cream. Stop by the original Handel's Homemade Ice Cream & Yogurt on off Market Street. There is nothing better than the atmosphere of the yellow lights of Mrs. Handel's flagship store and a sugar cone full of chocolate pecan.

(The menu is from Handel's Williamsburg, VA location. I saw a familiar awning from almost 1/4 mile away and thought it could be and it was. They lack chocolate marshmallow.)
Posted by Joe Lowry at 9:27 AM 2 comments:

Check out a couple of things going on in Youngstown today:

Two words: DiRusso's sausage. I try and promote those awesome things about Youngstown, even if it causes a run on sausage sandwiches. John Slanina (owner/operator of Shout Youngstown) is setting up camp downtown for an hour today in front of the Youngstown Business Incubator with some free lunch. Check it out between noon and 1-ish where he promises sausage, boca burgers, turkey burgers, kelbasi, paprika-rubbed slanina, and some chevapchichi. Will have some sides, chips, chairs, and plant-life. No word on whether he means palm trees or lettuce for the burgers. 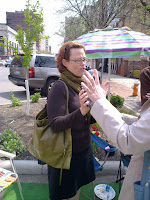 There is nothing I love more than finding a new book to read. With my new Kindle, I miss turning the pages but can carry hundreds of books in a nice little package. There is nothing better than browsing the stacks, however. Take 20 minutes and head over to the library. The main branch of the Public Library of Youngstown and Mahoning County is open until 5:30 today. For those hipsters who like their internets, the Library can be found on Facebook, Twitter and Youtube.

Not much Youngstown-related news this morning, but still some winners. 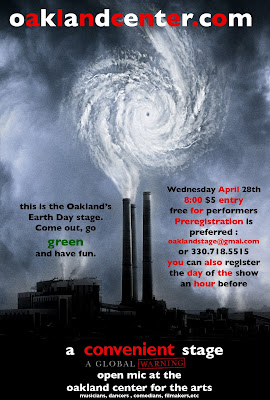 According to the Vindy, the Covelli Centre will hit its 1-millionth visitor tonight. Tonight's visitor will be attending the Nickelodeon show 'Storytime Live!' The winning fan receives a one year pass to all Covelli Centre events, including to see Elton John on May 1. There is no word on what they will do if a 3-year-old wins.
Posted by Joe Lowry at 1:26 PM No comments:

A couple of cool things out there this morning:

Have you ever considered getting involved with community support agriculture? Now is the perfect time to look into a CSA in the Youngstown area. If you aren't in the know, a CSA (and its members) provides financial support to local agriculture and in exchange, you get some of the goods dropped at your door every week. Want some fresh swiss chard, strawberries, or peaches? Join one of the several CSA's in Youngstown. Grow Youngstown has all the details on this awesome and totally affordable program.
Posted by Joe Lowry at 9:00 AM 1 comment:

Get rid of the Monday blues with some kolachi! Ghossain's Mid East Bakery on South Avenue has a wide variety of Lebanese and other Middle Eastern foods, including fresh baked pita and lavash, desserts and confections. Check out their website for a full list of options. Not in the Youngstown area? They will ship to you! 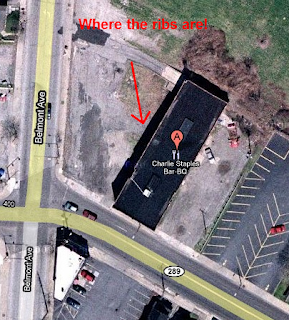 How about some ribs? Head over to Charlie Staples and try the best BBQ in Ohio. I recommend the combo platter, with ribs, chicken, slaw and fries. Find the white bread buried on your plate in order to soak up the delicious sauce.

Tulips, daffodils, and magnolias, oh my! It is peak time to see the blooms at Fellows Riverside Gardens in Mill Creek Park. Because of the early warm weather, many flowers popped up early and the next two weeks provide the best time to see the garden in full bloom! If you've got the day off, why not make the trip to the South Side and take it all in? Check out the Garden's website here.

123 McKinley Avenue
Youngstown, OH
Posted by Joe Lowry at 9:00 AM No comments:

It's Friday Happy Hour! Why not head downtown and visit the Lemon Grove. Urbanspoon.com rates them as one of the best happy hour joints in the Mahoning Valley. They have over 30 beers on draft or in bottles as well as an extensive wine list. Stay for dinner and the musical stylings of Akron musicians 'Trouble Books'. Find their website here.

BTW: They have their own art blog! 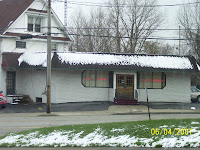 What a better way to start this adventure than to head to the Golden Dawn and have a slice of pizza and a schooner of beer? Head there on a Saturday morning and have the most inexpensive breakfast in town. This institution is my favorite place to go in Youngstown, so I selfishly made it number 1. I swear, I will try and diversify for the remaining 364.
Find out what it's all about: Golden Dawn
1245 Logan Avenue
Youngstown, OH
330-746-0393
Posted by Joe Lowry at 9:00 AM 1 comment:

365 Things To Do In Youngstown

I was recently inspired by a Facebook group called "365 Things To Do In D.C." and thought, 'Why not Youngstown?' Starting tomorrow, I will post one daily tip, helping Youngstown residents connect with their city and find new things to talk about. If you have something you want me to feature, drop me an email or leave a comment. I am excited to take this journey through Youngstown, its places and events. Let's get going! 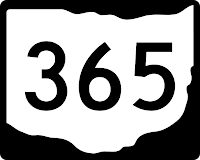 To see the all of the things to do in Youngstown, click here!
Posted by Joe Lowry at 4:29 PM 1 comment:

Time for a walk

I love walking tours and am fortunate to live in a town where they are the norm, not the exception. In fact, every year D.C. has weekends offering dozens of free walking tours. I most recently made my wife suffer through a tour of Fort Stevens which included several men and women in period costumes. Let's just say that it really isn't her bag.

Anyway, it isn't Fort Stevens, but a pretty cool walking tour of Y-town is coming up. Check out the details from the Vindicator:


Mahoning Valley Historical Society is kicking off its 2010 History to Go Program with a walking tour through downtown Youngstown.
The free event will highlight the history and architecture of area skyscrapers, retail facades and theaters.

The 60- to 90-minute tour is scheduled to begin at 3 p.m. April 17.
Participants are asked to meet in the lobby of 20 Federal Plaza where the tour group will be formed.

Walkers are reminded to wear comfortable shoes.
For more information call (330) 743-2589 or visit www.mahoninghistory.org.
Posted by Joe Lowry at 9:02 AM No comments:

In a bold and unprecedented move, Mayor Jay Williams announced today that he would cede the entire city of Youngstown to Girard effective immediately. Williams made the move because of the fiscal constraints existing in the city and the realization that many of the planned 'Youngstown 2010' initiatives will be impossible to accomplish by the end of 2010. Williams feels that Girard can best handle the issues facing Youngstown citizens.
"Girard has a proven track record of taking care of its citizens and we feel that their system would benefit Youngstown better than anything we could do," said Williams at the press conference announcing the move.
At the press conference, Girard mayor Jim Melfi ordered all signs having the word 'Youngstown' in them to be changed to 'Girard'. Jim Cossler, chief evangelist of the newly re-named Girard Business Incubator on West Federal Street in south-central Girard, was seen on a ladder making the sign changes himself.
As an indicator about how fast the changes were taking place, the Golden Dawn on Logan Avenue had been renamed Pizza Parlor II within minutes of the announcement.
There was no reaction from residents of the former city of Youngstown as most of them were shopping in Boardman at the time and unaware the change had occurred.
------
Editor's Note: This blog will be renamed Girard Pride as soon as time allows.
Posted by Joe Lowry at 10:00 AM 1 comment: