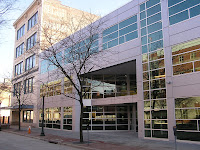 If you haven’t been downtown for a while, the Taft Technology Center on West Federal Street is nearly complete. Turning Technology will be moving 130 jobs into the building by May 1st.

What does this mean for a Valley that is still losing manufacturing jobs? Recently, Indalex, GE, and Mold-Tech have either ceased or significantly cut back operations. In spite of the difficult transition—one that is sure to continue—there is a bright future for Youngstown, and the Taft Technology Center and Turning Technology are certainly part of that future.

Excerpt From the Vindicator, Tuesday, April 08, 2008
Inc. Magazine last year ranked Turning Technologies as the fastest-growing, privately held software company in the U.S.
Entrepreneur Magazine ranked it last year as the seventh-fastest growing small business in the nation with $20.6 million in sales in 2006. Sales increased to nearly $28 million in 2007.
Broderick and two others started the company in 2001 and recorded just $111,000 in sales the following year.
Posted by Youngstown Born and Still Here at 10:48 AM No comments: