Imagine a lazy flowing river with great shops and restaurants with crowds that show this place to be a true destination. I happened to be in San Antonio a few weeks ago for work and was amazed by the River Walk. For those who have never been to San Antonio before or heard of the River Walk, the San Antonio River winds it way through downtown San Antonio and along its banks are a string of restaurants, small shops and tourist attractions, all within blocks of the Alamo. Youngstown doesn't have the Alamo (although several of our residents have made last stands against the YPD) but we do have a great river winding its way along several major roads near downtown.

There was some talk of a Youngstown River Walk a few years ago if I recall, tied in with the Mahoning Commons development (What is up with that project, by the way?). If it wasn't specific talk, there were examples where an attempt was made at starting in that direction. The B&O Restaurant and Anthony's-on-the-River had a good thing going for a while. The missing component to tie them together was the actual river walk. There is no easy way for people to walk along the banks of the Mahoning River.

Imagine having dinner at Anthony's and then taking a nice stroll on a summer's night heading towards the Chevy Centre and taking in a show. It sounds like a great idea to me, and I'm sure some of the other bloggers would agree. I'm not sure what influence I can have on such a project other than writing about it, since I am in fact 300 miles away, but this is certainly worthy of discussion once downtown gets the attention it needs.

I'm curious to see what others thing about this. It would be a great way to continue development of downtown and push it to the "Mahoning Commons" area.

Other cities, large and small, are trying River Walks as a way to expand their arts and entertainment districts. Check out these sites for more info:

“Until we're educating every kid in a fantastic way, until every inner city is cleaned up, there is no shortage of things to do.”

CINCINNATI (AP) - The Bill and Melinda Gates Foundation will provide more than seven million dollars to improve educational performance in some of Ohio's urban high schools.

The investment by the foundation set up by the Microsoft Corporation chairman and his wife will help continue funding for the next phase of the statewide Ohio High School Transformation Initiative.

KnowledgeWorks, the Gates foundation and the stat Department of Education will provide up to $20 million in resources for schools and districts involved in the initiative through June 2009.

"Look, you don't understand. There was shrinkage."

Another "shrinking city" article is out across the AP wire. This one takes the standard approach that shrinking your footprint can be effective means of "damage control" and revitalization for former industrial cities. The article doesn't really say anything new that hasn't been put out by similar articles in the past, but I felt that I would share it for those who might be interested.

The Chronicle-Telegram (Elyria): In Youngstown, acceptance is first battle

I chose that paper because their link came up first, but a Google News count shows 73 different papers, including Kiplinger and Forbes. Whether this story made it into the print editions is a different story...
Posted by Joe Lowry at 10:23 AM No comments:

Yet another new Youngstown blog...

Nathan Pavalko, a new North Sider, has started a new blog called "Tales from the North Side". Check it out at: http://talesfromnorthside.blogspot.com/
Posted by Joe Lowry at 10:20 AM No comments:

On the Soap Box

If you've got nothing to do this weekend, head down to Fifth Avenue to catch the 8th annual Greater Youngstown Area Soap Box Derby. Starting at 8:30 a.m., racers will roll down the hill in front of YSU stadium in a double elimination tournament. The winner gets a trip to Derby Downs in Akron for a chance at the national title.

If you know nothing about soapbox derbys (which I don't), this is something interesting to take with you:

Each heat begins with what is called a "two for four wheel draw". Four balls that have been labeled to match the wheels of the cars are placed in a bucket and each driver picks two. They then must switch the corresponding wheels with each other. For example if driver A picks the balls that say "front right wheel" and "back left wheel" those wheels from drive A's car must be given to driver B and put on his car. Then they race down 900 feet of track, drag the cars back up by themselves, switch all four wheels and race again. The competition is double elimination so that every driver is guaranteed four trips down the track. 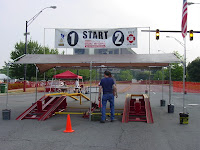 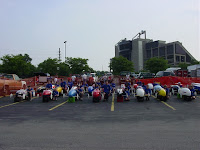 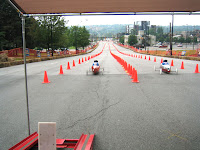 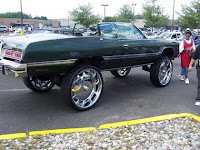 I have no idea how come people find out about Youngstown, including Noise Free America, an advocacy group trying to keep things library-quiet. According to an article in The Hill (A newspaper covering Congress), Youngstown is "noise hell." Noise Free America claims that "Youngstown's citizens are still inundated with bass booming cars, blaring music, incessant barking dogs, junky cars without mufflers, thunderous backyard fireworks shows, rumbling motorcycles, and loud gunshots. In short, noise levels in Youngstown are completely out of control."

The Hill article, published today, relates Youngstown's Noisy Dozen award to that of Washington, D.C. Youngstown has claimed the award twice, first in February 2002 and again in July 2006. Washington is the most recent winner. Warren, Ohio claimed the title in May 2007.

Youngstown has since strengthened its noise ordinance. I'm curious to know what Noise Free America would think now.

This is a new one to the rolls: Youngstown Renaissance

Tyler Clark is a North Sider and has some pretty good stuff already on his page. It is worth checking out.
Posted by Joe Lowry at 10:16 AM No comments:

Phil Kidd, local hero, had a great editorial in yesterday's Vindicator. Check it out here: Those who resist change lessen potential of Valley
Posted by Joe Lowry at 10:06 AM 1 comment:

In case you haven't read today's Youngstown Vindicator, Forum Health has backed out of a deal to merge its pediatric services (the most comprehensive in the Valley) with those of Humility of Mary Health Partners and Akron Children's Hospital. The deal would have preserved the pediatric services of Tod's Children Hospital while the rest of Forum circled the drain. Unfortunately, it was not to be. According to Dr. Elana Rossi of St. Elizabeth's, "The breakdown was not on our end." Forum's management seemed unable to deliver their portion of the plan, just as they have in the past two years of trying to restructure the hospital and provide a stable platform to deliver medical services to the community.

Of course, Forum will be closed within the year. The silver lining to all of this is that HMHP and Akron Children's end of the deal will continue, with expanded services at St. Elizabeth's and at the new hospital in Boardman.
Posted by Joe Lowry at 9:47 AM No comments:

Commencements blow the roof off the place!

Both Cardinal Mooney and Ursuline High Schools graduated this past weekend. Hundreds of students dressed in maroon and gold as well as green and gold walked across the stage of Stambaugh Auditorium to receive their diplomas on Saturday. A mere three hours after the UHS ceremoney, a large storm came through and literally blew the roof off the of place. The Youngstown Fire Department was toned out at 6:17 p.m. because the building had been struck by lightening. A large portion of the roof had actually been blown into Fifth Avenue. YFD placed that portion of the roof back into the front yard where it sat for the next twelve hours. 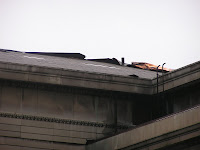 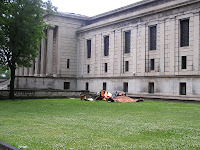