I was downtown a few weeks ago and walked past the rear of the Paramount Theater. Work was supposed to have progressed on this project but I haven't heard anything recently. The back gate was unlocked, but I suggest no one enter as it looked very unstable with the ceiling collapsed over the outside stairs. Just some interesting pictures. If anyone has any information on this project, please let me know. Thanks! 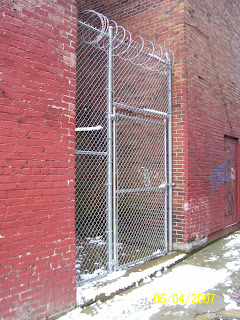 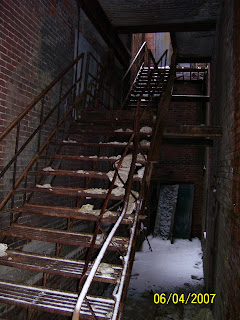 Where have I been?

Sorry for going a few weeks without posts. I have been very busy traveling for work and with a few other things so this was placed on the back burner for a bit. I will have some good photo posts up in the next few days. Also, I know I promised YoungstownPride.com. Well, I own the domain and have the hosting servive but I need to transfer the domain. This will take a few days after I do it, which won't happen today. Be patient. Good things are to come.

I was able to get out and take some pictures of the new East High School which I thought I would share. These were taken on Friday, April 6 so I'm sure they have even shown improvement since then. 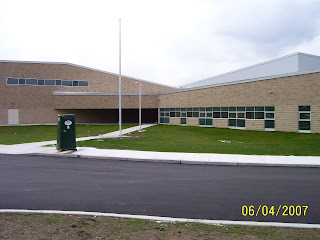 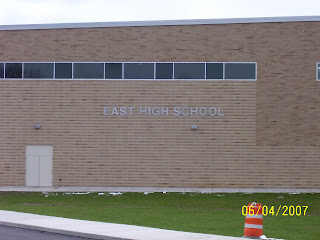 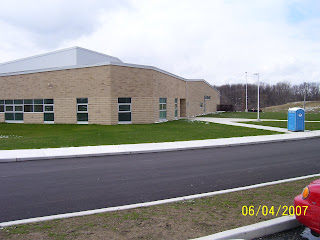 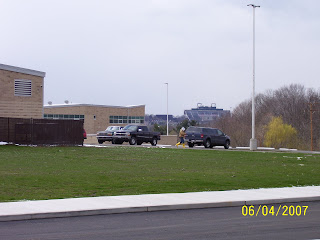 It was on this date in 1868 that Youngstown became a city. If you see her today, be sure to wish Youngstown a happy 139th birthday!
Posted by Joe Lowry at 4:10 PM 1 comment:

A UA student recently contacted me asking for information on the Paramount. She made the daunting trip inside and was able to snap these pictures. The level of decay is incredible and makes me wonder if the place can truly be saved. I suppose with a lot of money, anything is possible. 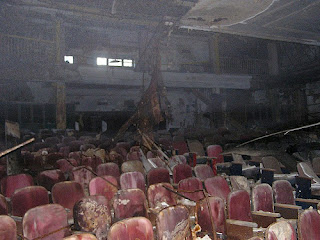 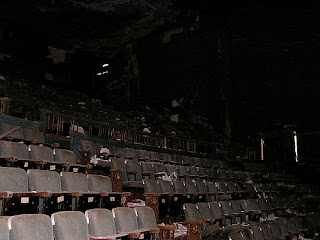 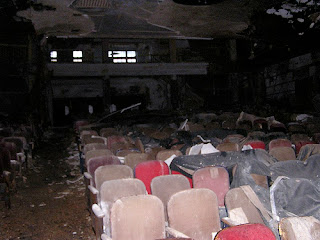 Check out the entire set at Flickr.
Posted by Joe Lowry at 8:59 AM 2 comments: 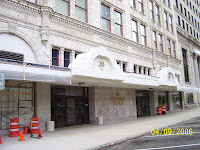 From the Business Journal

The first Trumbull County resident elected to statewide office was holding a news conference on the ground floor of 20 Federal Place – the building formerly named for Phar-Mor Inc., the drugstore chain whose bankruptcy 15 years ago followed what was then the largest corporate fraud in history. A space that came to symbolize corporate crime locally would soon house more than three dozen law enforcement officers, Dann announced.

The former state senator from Liberty said that he would move the state Bureau of Criminal Identification and Investigation’s 22-person staff for Boardman to the downtown building and add 16.

“We’re trying to build a new future here,” Dann said, “and what better place to start than here?”

In addition to the BCI staff, the third-floor space at 20 Federal will house members of Dann’s newly formed predatory-lending task force, his office’s consumer protection staff and other positions being transferred from Columbus. The 38 positions will bring an additional $1.8 million in annual payroll to the city, he said.

The attorney general had invited Youngstown and Warren officials to submit proposals, with a preference for downtown sites, and the state Department of Administrative Services reviewed them. Dann wanted sites convenient to highways for law enforcement agencies transporting evidence to BCI and close to courthouses.

Price and proximity drove the decision in Youngstown’s favor. The state will pay $7,488 per month, including utilities, for 10,000 square feet, with another 12,000-square-feet available for expansion. The 22 BCI employees were “overstuffed” in the 4,000-square-foot offices in Boardman, and rent was scheduled to rise to $10 per foot, Dann said. In Columbus, the cheapest space would have been $15 per foot, he noted.

The attorney general admitted to being “a little heartbroken” that a site in Warren was not selected – his former district includes Trumbull County ¬ and he acknowledged the efforts of Warren Mayor Michael O’Brien and the Trumbull County commissioners.

“In the end, Youngstown was the best fit,” Dann said. However, he he is also looking for additional chances to move jobs to the region; and Warren could benefit later.

The new state lease will bring occupancy at 20 Federal to nearly 70%, Chagnot reported. The offices are to move downtown by July 1.

In his remarks, Mayor Jay Williams offered that Dann had quickly debunked two myths – one about the lofty promises politicians make when campaigning yet fail to keep once elected, the other about attorneys being talkers, not doers.

Dann said he is working to debunk one more myth – that the Mahoning Valley does not have a bright and vibrant future, a perception he is trying to change around the state and the country.

“This is a community on the rebound,” he declared. “We’re going to take advantage of that on behalf of the taxpayers of the state of Ohio.”

Talk about a busy day...

So, pretend you are Billy Jack Fitzmorris. You wake up not feeling well so you have some friends take you to the hospital. The difference between you and Billy Fitzmorris is that you can walk out your front door and Fitzmorris requires his cell opened and an armed escort to the hospital.

Unless you live in a cage, you know what is going on right now. If not, turn on your favorite network news. I prefer CNN but feel free to turn on MSNBC or *gulp* FOX News.

I can't even imagine how Fitzsimmons found time to overpower a guard and hold a few people hostage, drive from Youngstown to Hillaird, rob at least two banks and lock himself up in a house. ALL BEFORE LUNCH! Youngstown to Hilliard is about three hours. Assuming it takes a few minutes to rob these banks, he got moving pretty early this morning.

While I don't condone his violent streak, including armed robbery, home invasion, and kidnapping, I do applaud him for getting up early this morning and really working hard today. We need to see more go-getters and hardworking Americans like this (just not committing crimes, that's all!).

Seriously, storm the house and get the guy already!
Posted by Joe Lowry at 2:07 PM 2 comments: