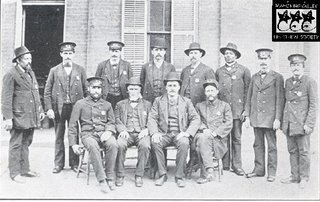 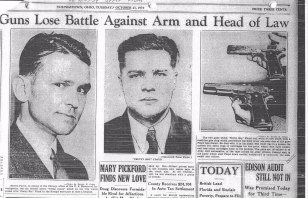 No more. This is West Federal Street looking east. 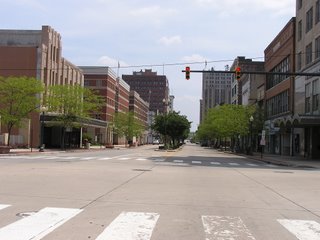 Going up and coming down

While I was home this weekend I was able to snap a few pictures around Youngstown. Two buildings in particular are worth sharing. The first is the new music hall next to Powers Auditorium. The Beecher Flad Pavilion is comprised of a new 600-seat auditorium for orchestra, brass, and choral performances; new kitchen facilities, new dressing rooms, expanded loading docks, and soundproofing so that Powers and the new auditorium can be used simultaneously. 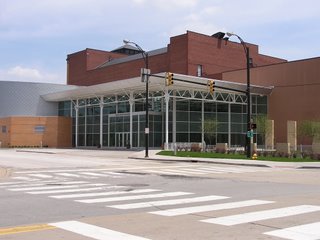 The second building is slated for demolition soon. The Youngstown Sheet and Tube office building is located on Martin Luther King near Division Street. The city currently has control of the building, which it obtained in March 2006. This photo was taken from the new ramp from Division Street ramp onto Robinwood. I think so, anyway. No online map has been updated to show the new streets. 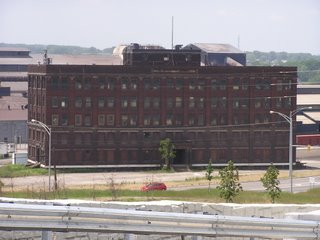 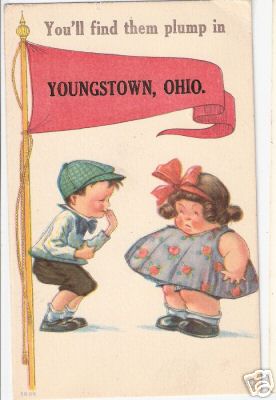 You'll Find 'Em Plump in Youngstown! What the hell does that mean? I don't know, but this early postcard is pretty funny. 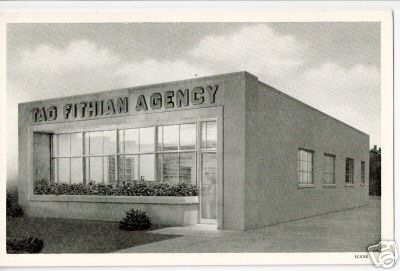 I'm not sure what the Tad Fithian Agency did or where these offices were located, but it was in Youngstown.

Update: YP-
My guess is that the Tad Fithian is the modern day Fithian Contracting Co., on Market Street near the Sparkle. I think it's the same building as the one in the picture, although it's been renovated somewhat over the years.
-MM (MightyMahoning) 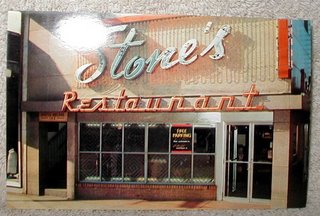 Stone's Restaraunt was located in downtown Youngstown in the 1950's. Sorry that this is a photo of a postcard. 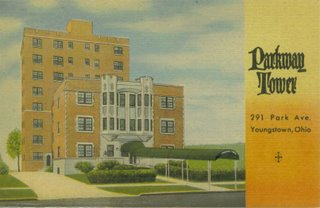 Last, but not least, Parkway Towers looks very grand in this postcard. The Towers still exist at the corner of Park and Fifth.
Posted by Joe Lowry at 11:15 PM 1 comment:

I try to keep this blog as politically correct as possible, with historic photos and articles on Youngstown's redevelopment, but that is not always possible. On that note, I present two instances where I recently have seen some representation of the Youngstown State Penguins in my travels. The first was at a friend's graduation from Loyola University of Chicago this past weekend. Low and behold, hanging from the rafters of LUC's Gentile Center was a red and white banner celebrating, or perhaps simply showing, YSU's participation in the Horizon League basketball conference. There is nothing I appreciated more than seeing a little bit of home 400 miles away.

The second time was just yesterday when I happened to be at the barber shop. Of course no self respecting barber would dare open his shop without a fine selection of magazines to keep waiting customers happy. On this particular day, the latest issue of Maxim happened to be out. While I am generally more interested in the random facts and party jokes, I happened to open to page 32 to find June's 'Campus Cutie.' 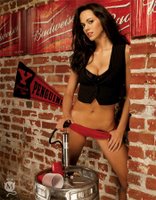 The rest of children are unknown. 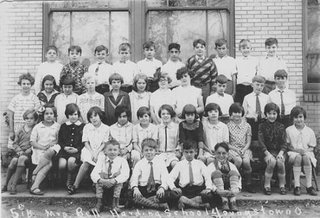 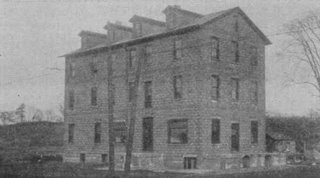 The new Rice Hotel, located opposite the Republic Rubber Works, Youngstown, OH, was being built in 1912 when this photo was taken.
Posted by Joe Lowry at 2:47 PM No comments:

Apparently using the word 'Youngstown' in naming a sports team does not have the appeal of say, 'Mahoning Valley.' For the second time, a minor league sports team has moved to the area with 'Mahoning Valley' in the name. First were the Scrappers, now we are proud to introduce the Mahoning Valley Thunder, our new af2 indoor arena football team. Some pics of the presser are below.

It appears that this team will be a direct competitor for marketing with the Mahoning Valley Hitmen, an apparent hack arena football team playing at the Ice Zone in Boardman. Please check out http://mightymahoning.blogspot.com for more on that debacle! 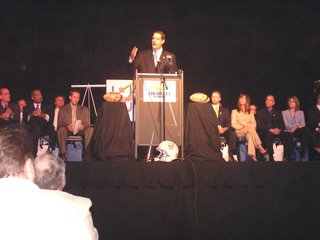 Congressman Tim Ryan provided some remarks during the event. 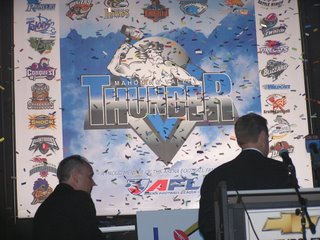 The new logo of the Mahoning Valley Thunder.
Posted by Joe Lowry at 5:03 PM No comments: 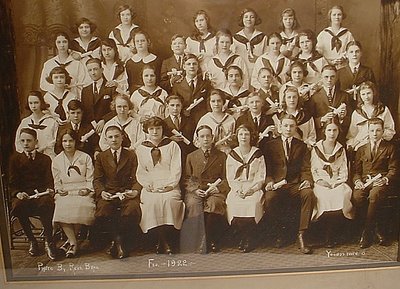 Seventy-eight years before I graduated from Ursuline, this stellar group of young lads and lasses was walking the halls of 'the old building.' This is the Ursuline High School class of 1922. They missed World War I by just three years but they suffered the depression and most likely sent their own children off to World War II. The stories they could tell, if still alive today, I'm sure could fill volumes.
Posted by Joe Lowry at 9:39 PM 2 comments:

That is what Youngstown native Steve Vaught (born Stephen James Liller) has worn through on his walk across the United States. Today Steve will walk across the George Washington Bridge, entering New York City over a year after he left San Diego. He has battled sore legs and knees, bad weather, and poor diet among other difficulties, but he has perservered. He has lost over 100 pounds, and although that was his primary reason for the walk, he says he has gained a lot more in insight and perspective into himself and the world. If you want to follow the path of a fellow Youngstowner, granted you have one day to do it, or read more about his journey, you can find more about him at Fat Man Walking.
Posted by Joe Lowry at 8:58 AM No comments:

YOUNGSTOWN — A downtown building is honored in today's Parade magazine for being one of the places that helped shape America's history and culture.

The three-story building at 325 W. Federal St. was where Harry Burt created the Good Humor Bar, the nation's first ice cream on a stick.

The 11 sites selected by the Sunday magazine and the National Trust for Historic Preservation will receive a plaque, while one site — a Virginia resettlement community built by blacks during the Depression — earned a $50,000 restoration grant.

He said he hoped to bring recognition to a significant event in Youngstown's history that isn't widely known. Now that the building has wider recognition, Faniro hopes it is more likely to be preserved.

"This should be considered as one of America's treasures, right here in Youngstown," he said.

Clark operates Ross Radio, an electronics equipment store, from the building. Faniro, whose company specializes in preserving historical buildings, said this building is one of several that make up one of the nation's best collections of terra cotta facades. These buildings were designed by some of the leading architects of the time, he said.

Faniro said he nominated the building because he knew the Good Humor Bar had national recognition.

In 1920, Burt was running an ice cream parlor and candy-making business when he created a smooth chocolate coating that was compatible with ice cream.

He decided the combination was too messy, but his son, Harry Jr., suggested freezing wooden sticks into the ice cream.

Burt called his creation the Good Humor Bar, capitalizing on the belief then that a person's "humor," or temperament, was related to the humor of the palate, or sense of taste. He received a patent three years later.

Burt sent out a fleet of 12 chauffeur-driven trucks, complete with bells, to market his product. After he died in 1926, his wife, Cora, sold franchises at $100 each and the ice cream treats became known throughout the Midwest.

The Good Humor Corp. of America was formed to acquire the patents and consolidate operations, and a New York investor, M.J. Meehan, acquired 75 percent of its shares in 1930.

The fleet of Good Humor trucks expanded in the 1950s and 1960s, as the Meehan family sold the company in 1961 to the Thomas J. Lipton Co., now a subsidiary of Unilever.

The direct-selling business was phased out in 1976, in favor of sales at stores. The Good Humor trucks that remain on the road today are owned by ice cream distributors or private individuals.

For more on Harry Burt and the Good Humor Bar, check out these links:
National Archives article
Wikipedia article
Ice Cream USA
Posted by Joe Lowry at 12:42 PM No comments:

Spend your life in bed? OK!

I try not to post non-Youngstown related material, but I saw this on CNN this morning and thought others might enjoy it. Erin (don't know her last name) is a women participating in a NASA study at the Cleveland Clinic who basically has to spend 12 weeks in bed. Actually, she is strapped into a harness hanging more or less horizontally with her head down at a 6 degree angle. She is blogging about her whole experience here: http://stardustholiday.blogspot.com/
Posted by Joe Lowry at 9:33 AM No comments: 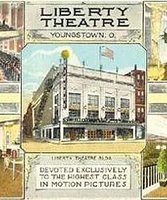 Word on the street is that an Illinois firm, Grand Venues, has bought the Paramount Theater. They plan to turn the building into a performance space and theater. They paid $79,900 for it with renovations estimated to cost $3.5 million. They hope to have the building open within two to three years. Check out the article in the Vindy to read more about the upcoming work.
Posted by Joe Lowry at 11:31 AM 1 comment:

Looking for a home? Try eBay!

If you have something to sell, eBay is the place to sell it. The online auction house has almost everything - including eight Youngstown homes which are on the market. Want a fixer-upper? Try this house on East Chalmers. It has vinyl siding! For only a few thousand bucks, you can own one of these lovely homes on Chalmers, Garland, Pearl, Ravewood, LaClede, and Saranac. They all need work and are located in neighborhoods which I would classify as blighted, but I didn't see one that couldn't be renovated and rented or sold as a single family home. The potential for the price is there. Seven of the eight are selling for the $11,000 or less. The eighth house is my favorite however. Not the house itself, but the ad: Almost Austintown! Youngstown West Bungalow. Almost in Austintown? I'm sorry to report that in this day and age, living in Youngstown is better than living in Austintown. Youngstown's renaissance is just beginning. Austintown is entering the Dark Ages. Plus, at $69,900, you could by a much nicer house in the North Heights neighborhood on the North Side.
Posted by Joe Lowry at 11:03 AM No comments: