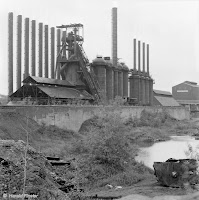 Washington Post - May 17, 1936
Youngstown, Ohio, May 16 (AP) -- The Jeannette Blast Furnace of the Youngstown Sheet & Tube Co. today resumed production after being idle for five years.

Some history of Jennie:

Built in 1917-1918 at a cost of $3 million, it was one of three blast furnaces in operation at the plant, then owned by the Brier Hill Steel Company. It was "blown in" or lighted on September 20, 1918 by its namesake, Mary Jeanette Thomas, daughter of W.A. Thomas, who was the President of Brier Hill Steel. The furnace was 90 feet tall and weighed 500 tons. It produced more than 11 million tons of steel in its lifetime, and is said to have produced 34,356 tons of pig iron in one month during the early years of iron production. Brier Hill Steel was purchased by YS&T in 1923. The Jeanette furnace went out of blast in September of 1977 when the Brier Hill Plant was shut down. It was one of the oldest blast furnaces in the United States, and the last of its kind in Youngstown.

The Jeanette furnace was torn down at 11:37 a.m. on Wednesday, January 29, 1997 to clear the 62-acre brownfield for use as an industrial park. Musician Bruce Springsteen refers to the Jeanette in the lyrics of his song "Youngstown," a melancholy musical tribute to the steelworkers of the Mahoning Valley.

Source: Youngstown Public Library
Posted by Joe Lowry at 9:27 AM