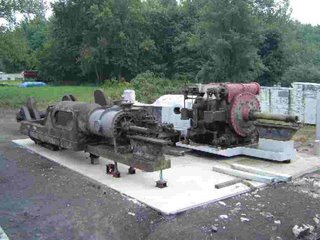 On September 18 the Tod Engine, which powered a rolling mill at Youngstown Sheet and Tube for 65 years, was reassembled at the Tod Engine Heritage Park on Youngstown Hubbard Road. The engine was removed from North Star Steel Ohio ten years ago and stored in a warehouse in Girard until Monday when the last two parts were moved to the museum site.

The completion of the reassembly of the large parts means that come next Memorial Day Youngstown will have yet another tourist attraction for residents and visitors to enjoy. Work will continue over the fall and winter to erect a building over the engine and make other preparations for next year's grand opening.

The Tod Engine weighs over 250 tons, produced 4,000 horsepower and is one of the largest stationary steam engines in the United States. It is a Mechanical and Materials Engineering Landmark.

For more information visit the Tod Engine website and photos of the reassembly are in this Webshots Album.

Posted by Rick Rowlands at 7:43 AM