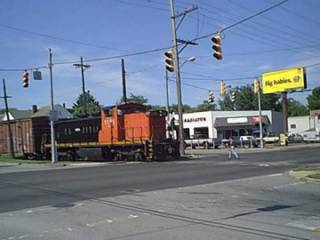 The railroad thinks the Youngstown-to-Darlington line can be profitable.

EAST LIVERPOOL — By its own admission, the Columbiana County Port Authority's railroad has "limped along" since the agency acquired it four years ago, but CEO Tracy Drake contends it finally is on the right track.

The port authority bought the former Youngstown & Southern rail line in 2001 after a protracted legal battle with a Boardman-based partnership called Railway Ventures Inc., which had sought permission to rip up the tracks and develop the property.

But after sinking millions of dollars of public money into the railroad, the port authority ended up with a little-used line operated by a bankrupt company.

Drake blamed the previous failure of the Central Columbiana & Pennsylvania Railway on its underfunded operator, Arkansas Short Lines. He said the company, which ultimately declared bankruptcy, did not have the resources to properly maintain the railroad.

But Drake insisted the railroad still can be profitable with the right operator. And he said he believes he has found that operator in Ohio Central Railroad, which runs four other rail lines in the Mahoning Valley.

The company formally took charge of the Youngstown-to-Darlington, Pa., line on Wednesday and continues its assessment of the 35.6-mile run. Terry Feichtenbiner, the company's general manager, said the firm hopes to resume freight service in a couple of weeks under the name Ohio & Pennsylvania Railroad.

"Under the proper conditions, we feel it can be a profitable, well-run line," he said Thursday while inspecting the track on a high-rail vehicle.

"The Ohio Central is a proven operator," he said. "They have a very good track record of building business on the line. ... They've demonstrated they can do it. And they invest in the lines they operate."

To port authority officials, the economic benefits of keeping the railroad in service are clear. Proximity to rail gives the region a distinct advantage in trying to lure certain kinds of businesses. That is especially true considering companies can get up to 25 percent off shipping prices charged in many other parts of the country, Drake said.

"This railroad connects to both Norfolk Southern and CSX. Because of that, neither of those railroads have a monopoly," he said.

But David Handel, a partner in Railroad Ventures Inc., expressed skepticism. He described the port authority's involvement in the railroad as a boondoggle that has cost millions and yielded few benefits.

"The line has been there for decades and is still operating. Have you seen any economic development?" he said.

"They are spending millions of public dollars to facilitate the importation of trash from the East Coast," he said. "They are trying to encourage that, while everybody else is trying to discourage it."

Drake, however, said the landfills employ about 50 people, including heavy equipment operators who earn $16 to $17 an hour plus benefits. He also noted other companies that use the railroad, like Banner Supply, which manufactures building materials, and Darlington Brick & Clay Products, which recently constructed a rail-handling facility as part of an expansion.

Drake said railroads have become an attractive alternative to trucks as the nation's highways have grown more congested. He cited projections from the U.S. Department of Transportation that the amount of cargo carried on U.S. railroads will double over the next 10 years.

Drake said the Youngstown-to-Darlington route could carry more than 4,000 train cars of cargo a year, a volume that would put it close to the heaviest ever — for a line that dates back to 1854.

Feichtenbiner, the Ohio Central general manager, said his company is aiming for a volume of 3,000 to 5,000 cars per year. With an aggressive marketing effort to attract new businesses, he said, a long-term goal of 10,000 cars in not out of the question.

Jannaza said Ohio Central has done it before. He said the company in the 1980s took over the Ohio Southern line between Zanesville and New Lexington, which had been out of service for several years. Around 1999, he said, the line began handling large shipments of coal.

Jannaza said the company enjoyed similar success when it took over the Panhandle line from Columbus to Steubenville in 1992. Despite losing its major user, he said, Ohio Central has been able to double the volume from fewer than 12,000 cars per to year to about 25,000 cars.

But Feichtenbiner warned that the Youngstown-to-Darlington rail line remains in poor shape. He estimated half of the railroad ties need to be replaced and tens of thousands of crushed rock needs to be restored.

Using rough estimates of the costs of labor, wooden timbers and ballast rock, the costs could be $3 million to $4 million, not including possible damage to the rails.

That is on top of the millions of dollars already spent by the port authority.

Handel questioned the value of the money the port authority has sunk into the railroad. In addition to the purchase price of $1.08 million, the authority has invested some $3 million in repairing the line and has spent another $500,000 on legal fees in its battle with Railroad Ventures.

Drake said economic development, not profit, always has been the motive. He said the authority will recoup some of its losses with its lease agreement with Ohio Central and plans to sell it to the company in 2006 for about $1.2 million.

"If we can come out of this on a break-even basis, we'll be happy," he said.